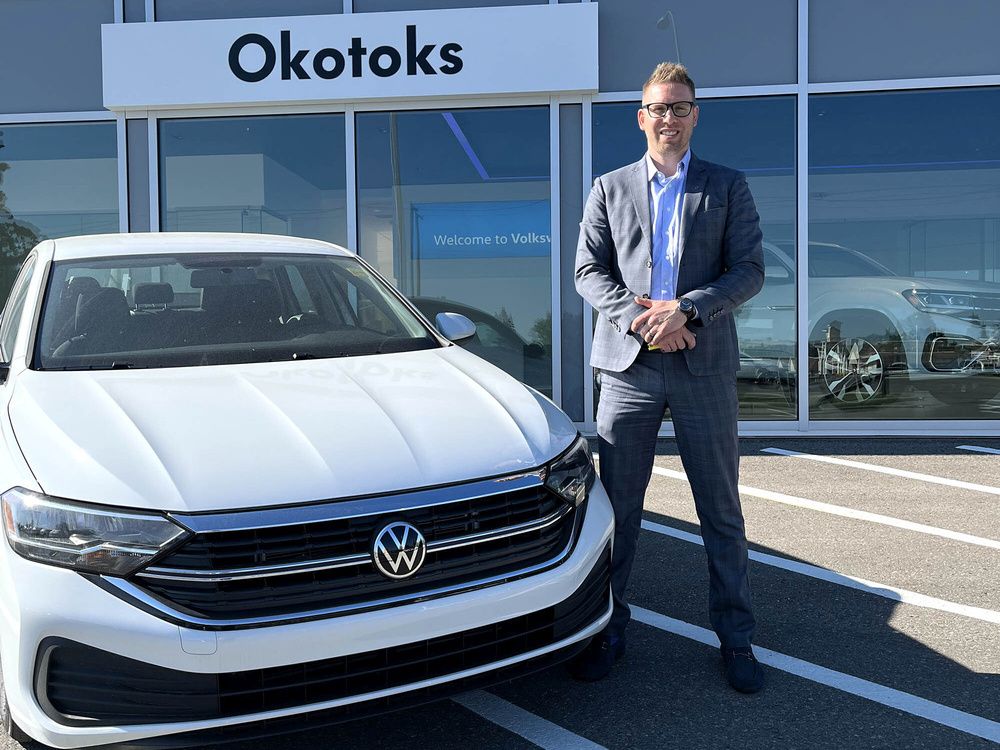 The Wood Automotive Group has opened its new dealership, Okotoks Volkswagen, in the heart of the community on Westland Road. It is the second corporate dealership serving the city and surrounding areas, after Okotoks Ford Lincoln, which has been a fixture in the Foothills area for over 30 years.

“We are thrilled and proud to open Okotoks Volkswagen, the newest member of our family business, to serve customers throughout the South,” said Gerry Wood, Executive Chairman of Wood Automotive Group. “It’s been just over a year since we acquired South Center Volkswagen in Calgary, which has seen tremendous growth and success.”

As a satellite operation of South Centre, the new franchise is the first of its kind in Canada.

Pierre Boutin, President and CEO of Volkswagen Group Canada — who attended the grand opening last week — said, “Volkswagen Canada has ambitious growth plans; the opening of this store in Okotoks provides residents of the community with a great new Volkswagen store in their backyard. Working with the professional and customer-focused team at Wood Automotive Group has been great.

Leading the team at the new dealership is General Manager Joshua Buchanan, who also retains that role at the South Center location.

Buchanan has worked in the auto industry for 17 years and joined Wood Automotive Group at its Village Honda dealership in the Northwest Auto Mall, but was transferred to the position of general manager of South Center Volkswagen when it was purchased in March 2021.

Delighted to add Okotoks to his responsibilities, he is proud of the state-of-the-art dealership which is a total renovation by Barjac Construction of the vacant building which housed the former Ford dealership before it moved to a new location in Okotoks.

The 9,000 square foot dealership is designed around Volkswagen Canada’s all new image of a smaller footprint to break into supplying and servicing its full line of vehicles in rural markets.

The dealership has a trendy customer service lounge and 12 service and detailing bays, including one dedicated to servicing electric vehicles.

There are also three charging stations for electric vehicles; one for its in-house technicians and two for general public use.

The company’s slogan is “Electricity is finally for everyone” and Volkswagen’s ID.4, an all-electric all-wheel-drive SUV offering emission-free mobility, has proven very popular. Buchanan says it’s Volkswagen’s number one seller in the Pacific region and he expects its first delivery here in the fourth quarter of this year.

They will be greeted with great local enthusiasm as he has orders lined up over the past year.

Calgary-based Wood Automotive Group has nearly 600 employees across seven dealerships, a body repair center and a used online sales ground. And construction is underway on a new dealership for its Big 4 Motors at Taza Park, near the Gray Eagle Casino on Tsuut’ina Nation land, which will move from its current location on Macleod Trail South.

The obituary pages of this journal are must-read, but sometimes present shocking news when we discover the death of someone we have known and admired for a long time.

This was the case last Friday morning facing a photo of Roger Jarvis.

It doesn’t seem long – even though it must have been pre-COVID – that he called to say, “Can we have lunch; no agenda, just a catch-up? »

For a few hours in the pleasant atmosphere of the Ranchmen’s Club, we chatted about Jarvis Travel and his passion for the Stampede and Rotary, and how lucky we were both to live in Calgary.

Roger was a great Calgarian who did so much for this city. He was 88 years old.

Peggy Perry, who joined Willow Park Wines and Spirits 28 years ago and served as president for the past four years, has retired.

During her dedicated time there, she helped owner Wayne Henuset create and grow what became Canada’s largest private wine, beer and spirits retailer, and did so much to boost his Vintage Fund, which has raised over $4 million to support local charities and organizations since its inception in 2001.

David Parker appears regularly in the Herald. Read his columns online at calgaryherald.com/business. He can be reached at 403-830-4622 or by email at [email protected]

Sign up to receive daily news from the Calgary Herald, a division of Postmedia Network Inc.

Thank you for your registration!

A welcome email is on the way. If you don’t see it, please check your spam folder.

The next issue of Calgary Herald Headline News will soon be in your inbox.

We encountered a problem during your registration. Try Again

BridgePayday Installment Loans: How They Help You Finance Big Purchases or Consolidate Debt