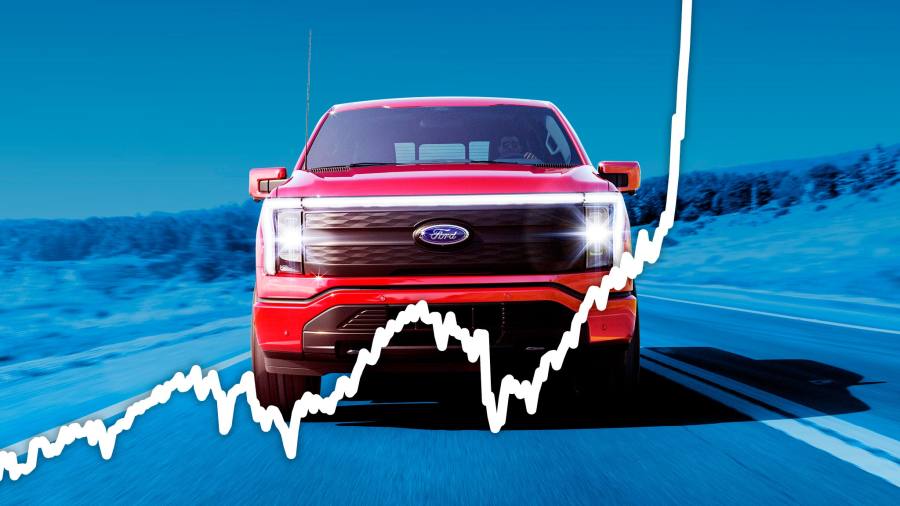 This is the critical moment for manufacturers of electric vehicles. Russia’s attack on Ukraine has highlighted concerns over oil dependence and fuel prices, just as carmakers are finally starting to deliver on their promises to deliver a wide range of greener cars .

Over the past 10 days, Ford, Stellantis and Honda have all announced ambitious plans to ramp up production of electric vehicles, and Tesla has finally secured approval to open a new battery factory in Europe.

An extraordinary spike in oil prices to the highest levels in 14 years reminds potential car buyers of the financial benefits of going green. It could turn out to be a global version of last autumn’s petrol shortages in the UK, which boosted online searches for electric cars and contributed to a tripling of the share of EVs in new UK car registrations in February, almost 18%.

The potential for radical change is particularly high in the United States. Prices at the pump are still more volatile there and are currently heading towards a new record. Americans have also been less enthusiastic about electric vehicles than drivers in other major markets, due to lower government subsidies, long driving distances and a lack of options beyond passenger cars. luxury from Tesla.

Rising oil prices have already started to spark consumer interest, as has a massive advertising campaign that saw half a dozen electric vehicle brands promoted during last month’s Super Bowl. But dealers can’t sell cars they don’t have. Global semiconductor shortages and shipping delays have left inventories at low levels. Demand for plug-ins was already growing faster than most automakers anticipated and critical battery components have long lead times.

Ford had to halt orders for the electric version of its popular F150 pickup truck in December because it couldn’t keep up with demand. Most of the announced cars won’t be available in the US for months. Even in Europe, where EV makers have been ramping up for longer, wait times of 9-12 months for popular models are not uncommon.

“Electric vehicles are defined more by supply than demand right now,” says Credit Suisse analyst Dan Levy. Automakers “update their targets every six months. The question is whether the supply can follow.

The fallout from the war certainly did not help. A handful of major auto groups closed Russian factories because of the invasion. Some have also halted production elsewhere due to supply chain issues. Ukraine is a major producer of the miles of cables and connectors that power the electrical systems of many cars – known in the industry as “wiring harness”.

While this production can be moved elsewhere if needed, Russia’s role as a key source of rare earth minerals creates a much more lasting problem. Prices for nickel used in many batteries have risen so much this week that trading has had to be halted. (Combustion engine cars are also vulnerable: Russia supplies palladium, needed for catalytic converters.)

The West has largely failed to plan ahead for the growing mineral needs of the energy transition. Unless environmentally conscious investors reconsider their usual disdain for mining, the lack of a secure supply of rare minerals will further drive up the already higher cost of electric vehicles as well as longer lead times. production.

There is a significant risk that many new car buyers who might have been enticed to try an electric vehicle will be put off by waiting lists and higher prices. I should know – my family wanted an electric SUV but settled for a hybrid when BMW couldn’t even provide an estimated delivery date. Many others will opt for another petrol model, delaying their personal energy transition by several years. By the time this car wears out, the current spike in oil prices may well be a thing of the past. The oil industry is much better organized to increase production than the rare earth miners.

Online searches for electric cars have already started to drop in the UK now that the petrol crisis has eased. And Americans have a long history of returning to gas consumers once oil prices have fallen, says Stephanie Brinley of S&P Global Mobility. This crisis, like so many others, could turn out to be another terrible mess.

Energy is the world’s must-do business and Energy Source is its newsletter. Every Tuesday and Thursday, straight to your inbox, Energy Source brings you essential news, cutting-edge analysis and insider information. Register here.