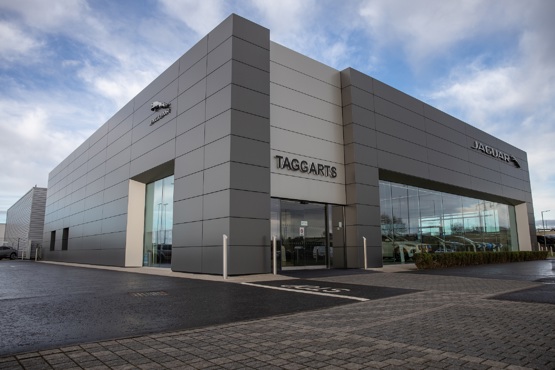 Jaguar Land Rover (JLR) and Volvo premium car dealerships in Taggarts will be rebranded after more than 120 years in business as Lookers prepares to unify its operations in Scotland.

AM100 PLC, which acquired Taggarts in 2003, insisted the new Lookers signage would be the only change to the operation which operates five franchise car outlets in Glasgow and Motherwell.

Duncan McPhee, COO of Lookers, from Campbeltown in Argyll, said: “Lookers continues to have a strong presence in Scotland and Taggarts has been a proud part of our family for nearly two decades.

“During this time, we have continued to invest in our premises and our colleagues to provide an exceptional experience for our customers that is suitable for the Lookers and Taggarts brands.

“To further reinforce and simplify our strong brand identity across the UK so that we are always instantly recognizable to our customers wherever they are, we are only changing the name above the door and moving forward as a strong brand.”

Dealerships included in Lookers’ subtle transformation of its Taggarts sites are its Land Rover retailers at Kennishead Road and Maryhill Road in Glasgow, and at Windmillhill Street in Motherwell as well as Taggarts retailers Jaguar and Volvo, both located in Hillington, Glasgow.

In a statement released to AM detailing the news of the change, Lookers said Taggarts had become one of the most recognizable names in Scotland’s automotive industry in over a century of trading since its inception in 1896.

McPhee added: “For almost 20 years, being part of Lookers has helped Taggarts deliver exceptional customer experience, value and choice to our customers across Scotland and that is something that will never change. Every visitor to our retailers will continue to receive the same excellent service and be warmly greeted by the same friendly faces who will always go the extra mile.

The group operates 150 dealerships in England, Wales, Northern Ireland and the Republic of Ireland and employs a team of over 6,500 people.

In August, the group posted a better than expected performance in the first half (H1) of the year with underlying profit before tax reaching £47.2 million.

That figure was down 5.6% year-on-year from £50m, although the group said the same period in 2021 benefited £12.7m from government support.

Earlier this week, AM announced it had added to its roster of 33 franchise partners after Great Wall Motors (GWM) electric vehicle brand Ora named it its first car retail franchisee in England.