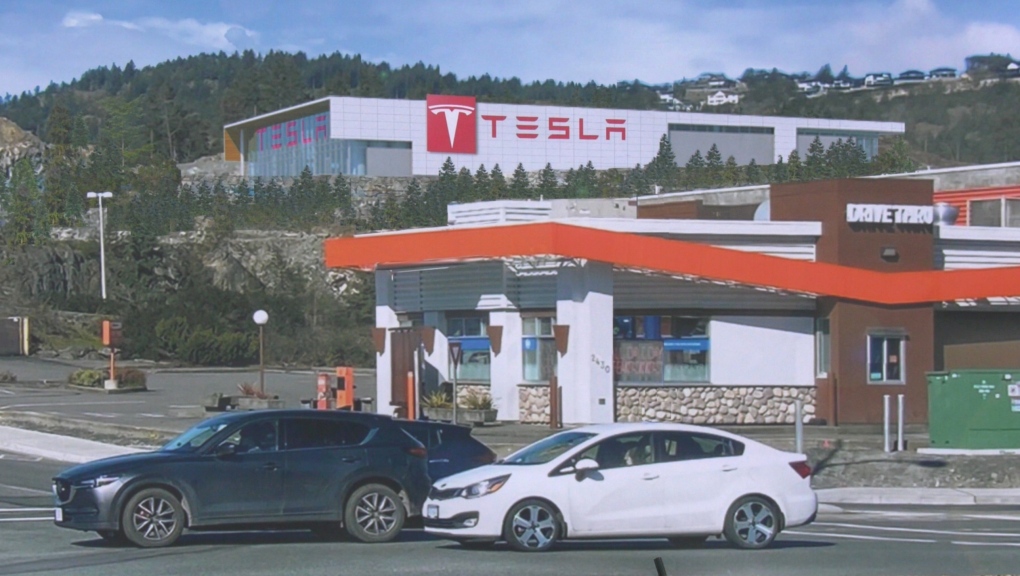 It’s another feather in the hat for the town of Langford. Vancouver Island’s only Tesla dealership and service center is officially coming to the West Shore.

It’s a decision that the municipality says will have huge benefits for the region.

Young estimates the 35,000 square foot building will cost between $40 million and $50 million to build and, when complete, will employ 50 people.

“It’s going to make it much easier for people to get any type of service,” said Heather Kellington of the Tesla Owners Club of Vancouver Island.

Kellington estimates there are 3,000 Teslas on Vancouver Island. Currently, if you need your vehicle serviced, you must either bring it back to the mainland or call the Tesla Ranger.

“We have two or three mobile rangers who come to your house to do any kind of minor work,” Kellington said.

She adds that with the arrival of a dealership, more people will be open to buying a Tesla.

Currently, the RCMP is outfitting a Tesla Model Y in Ottawa. It will become the first Tesla patrol vehicle in Canada and its home will be at the West Shore RCMP.

“This is the first for the Royal Canadian Mounted Police across the country,” said Insp. Todd Preston of the West Shore RCMP.

“When we knew a Tesla dealership could potentially be here, we leaned on that and said it would be an amazing site to try to test these vehicles,” he said.

This car will arrive this year.

Artist’s rendering of a Tesla Model Y that is outfitted for the West Shore RCMP.

“I would say yes, in the future you’re going to see everything electric,” the mayor of Langford said.

Langford has pledged to transition its city fleet of about 20 vehicles to electric vehicles over the next five years.

The mayor says the possibility of a new post-secondary institution coming to Langford has helped attract Tesla to the town.

“They want to have a new university where kids can be trained for all these new technologies and all the new jobs,” Young said.

Other auto dealerships in the area seem to welcome the idea.

The View Royal dealership sells used electric vehicles of all types, including Teslas.

With the new Tesla Service Center on the way, Sale predicts his dealership will benefit.

“It’s going to cause a huge, huge tidal wave of electric vehicle ownership on the island here,” he said.

The new dealership and service center is expected to open in June 2023.