The Alaska State Department of Revenue reduced its position in OE parts (NYSE: GPC – Get Rating) by 6.5% in Q1, HoldingsChannel.com reports. The institutional investor held 57,013 shares of the specialty retailer’s stock after selling 3,985 shares during the period. The Alaska State Department of Revenue’s holdings of original parts were worth $7,184,000 at the end of the last quarter.

Several research companies have recently commented on GPC. Bank of America downgraded Genuine Parts shares from an “underperforming” to a “neutral” rating and set a price target of $133.00 for the company in a Tuesday, May 10 report. They noted that the move was a review call. StockNews.com began covering genuine coin stocks in a report on Thursday, March 31. They established a “Strong Buy” rating for the company. Finally, Evercore ISI cut its price target on original parts stock to $135.00 in a Thursday, June 9 report. Four equity research analysts gave the stock a hold rating and one issued a strong buy rating for the stock. According to data from MarketBeat, the stock currently has a consensus rating of “Hold” and a consensus price target of $137.75.

The company also recently declared a quarterly dividend, which will be paid on Friday, July 1. Shareholders of record on Friday, June 3 will receive a dividend of $0.895. This represents a dividend of $3.58 on an annualized basis and a dividend yield of 2.62%. The ex-dividend date is Thursday, June 2. Genuine Parts’ dividend payout ratio is 55.42%.

OE Parts Profile (Get an evaluation)

Want to see which other hedge funds hold GPC? Visit HoldingsChannel.com for the latest 13F filings and insider trading for Genuine Coins (NYSE:GPC – Get Rating). 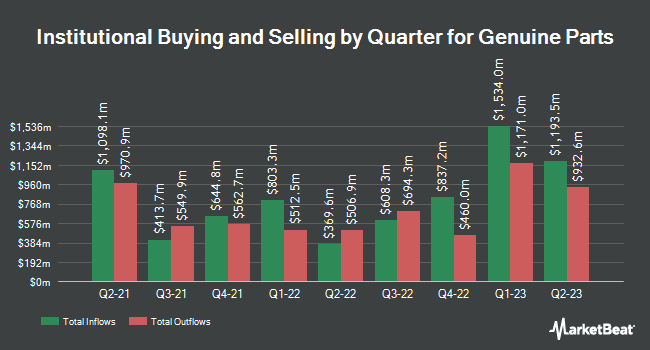