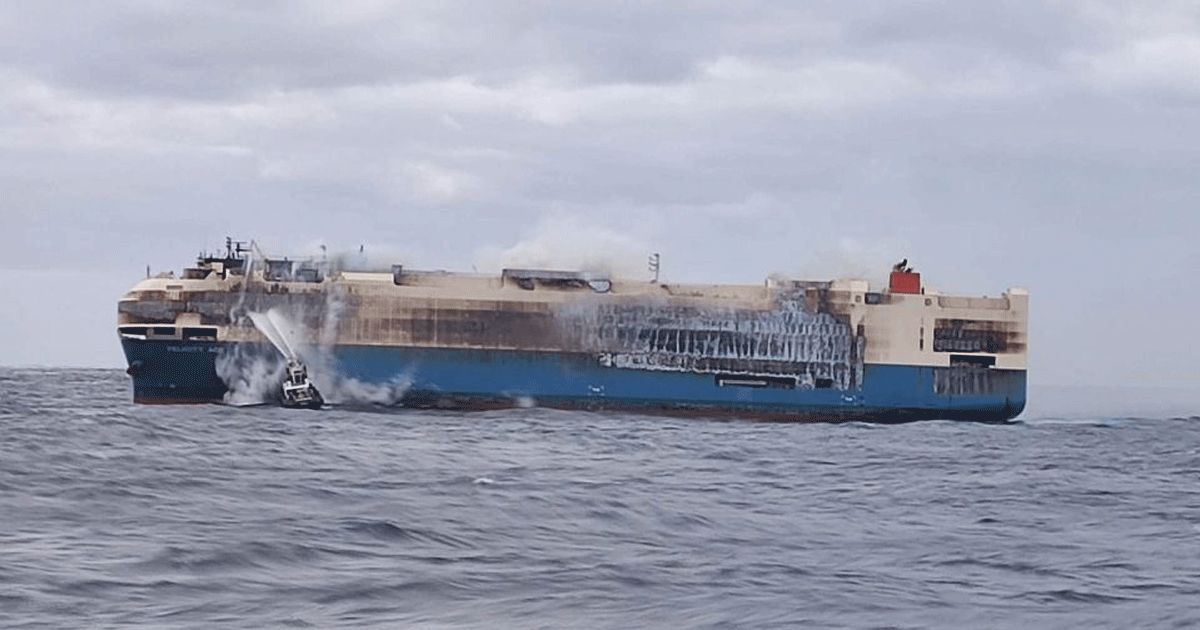 The burnt carcass of the freed vehicle carrier Felicity As could be towed and on its way back to a European port as early as Wednesday, less than a week after it caught fire while en route to deliver a load of nearly 4,000 Volkswagen Group vehicles from their factories in Europe to US dealers.

Meanwhile, dealerships across the United States spent the weekend and early this week assessing their potential losses and beginning to contact customers whose ordered vehicles are on board. Losses from the fire are estimated at $335 million.

The Associated Press reported on Tuesday that the flames were no longer visible from the ship and that a rescue team hoped to board on Wednesday to hook up a towline and bring the ship back. Felicity As return to port. Authorities do not yet know the cause of the fire, but the crew reported that the fire started at one of the loading decks where vehicles, including battery electric vehicles, were stored for transportation, the AP reported. Firefighting vessels aimed their water cannons at the ship’s hull to cool it and prevent any runoff from the lithium-ion batteries from polluting the surrounding Atlantic Ocean.

For Volkswagen, Audi, Porsche, Bentley and Lamborghini dealers in the United States, the fire is exacerbating already tight supplies due to the current shortage of microchips, and that means dealers will have to find ways to satisfy customers whose vehicles ordered were on board.

Porsche dealer Robert DiStanislao has a customer-ordered Cayenne on the Felicity As.

Porsche provides dealers with daily updates on the status of the vessel, said DiStanislao, president of mainline Porsche in suburban Philadelphia.

The potential loss of Felicity As is likely to worsen an already difficult inventory situation.

“This is going to cause us even more shipping delays because we now have one less transport vessel,” DiStanislao said.

The dealer has re-ordered a Cayenne for the customer, who should receive it in June, instead of this month.

But, there is a silver lining for the customer, who will receive an upgrade.

Due to limited product availability, Porsche Cars of the Main Line had to order a Platinum Edition Cayenne.

“The Platinum is more expensive than the original order,” DiStanislao said. “But we keep the same price for the customer.”

Like Porsche, almost all Audis – with the exception of the Q5 produced in Mexico – are imported from Europe to the United States via car transport freighter. Audi of America has not publicly disclosed the number of its vehicles on board the Felicity As.

Michelle Primm, managing partner of Cascade Auto Group in Cuyahoga Falls, Ohio, which includes Cascade Audi, said Automotive News that two of its customers had ordered vehicles on board the Felicity As — a Q3 and a Q7, both gas-powered crossovers. Both orders were “restocked from allocation,” Primm said, adding that customers understood what had happened, though they responded differently: “One was fine and the other was [upset].”

At VW, the hardest-to-manage losses will be in the ID4, the brand’s compact crossover electric vehicle that went on sale last year. Volkswagen of America executives said they are still trying to fulfill orders placed in the United States for the ID4s, which, for now, are made in Zwickau, Germany. VW’s factory in Chattanooga is expected to begin local marketable production of the ID4 this spring.

Fred Emich IV, general manager of Emich Volkswagen in Denver, said his store lost five vehicles aboard the ship, including three that were sold orders. Emich said the brand is “trying to replace orders sold” elsewhere in stock and the dealership is waiting to hear the results of that search before contacting affected customers.

A Bentley of America spokeswoman said last week that there were also 189 custom-built and handcrafted luxury vehicles from the brand on board. Bentleys are built in Crewe, England, and are transported from Europe together with other VW Group vehicles.

It may be some time before the exact cause of the fire is known. the Felicity As transported battery-powered and gasoline-powered electric vehicles. BEVs are not charged to full capacity at the factory, and gasoline vehicles are not filled, but both are sufficiently fueled to allow them to be loaded and unloaded when transported between the factory and their intended dealers.

Even before the advent of electric vehicles, automobile fires had been a recurring problem for automakers for decades. According to the most recent 2020 report from the National Fire Protection Association, there were an annual average of 117,370 fires in passenger vehicles in the United States each year from 2013 to 2017.