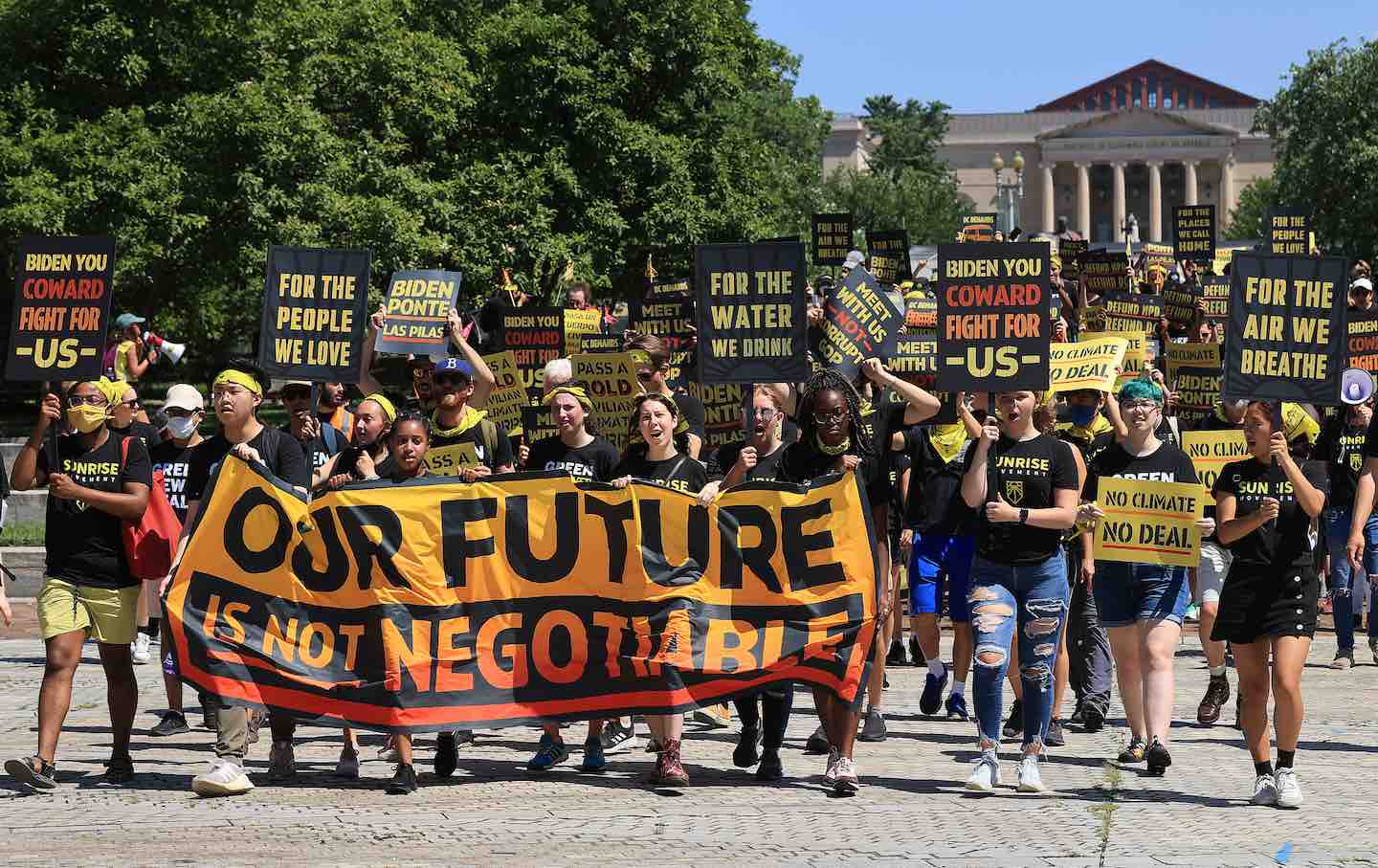 Thank you for registering for The nationweekly newsletter.

Thank you for signing up. For more than The nationsee our latest issue.

The nation is supported by readers: Donate $10 or more to help us keep writing about the issues that matter.

Did you know you can support The nation drinking wine?

The era of big government is back. At least it’s making a comeback, thanks to the momentum generated by the movement’s ecosystem of Green New Deal advocates, organizers and policy buffs.

At first glance, the Inflation Reduction Act should be cause for celebration. Each of those years without a coordinated federal plan to address climate change has been precious time spent dithering at the start line of the world’s most dangerous race. But with climate action, it’s not too little, too late: tens of thousands of lives are saved by every fraction of a degree of warming we avoid.

On closer inspection, however, the legislation reveals ugly contradictions. Chief among these is a provision that requires the federal government to auction public land for fossil fuel extraction before leasing it for renewable energy development. Although an environmental research firm’s analysis projects that every ton of carbon emitted from the bill will be met by 24 tons saved through clean energy investments, that’s little comfort for Appalachia clogging the pipeline. Mountain Valley or for the disproportionately black residents battling petrochemical cancer. refining off Louisiana.

The IRA is therefore the rare piece of legislation that oil CEOs and climate policy analysts might cheer for. If you call the act “massive”, “a mixed bag”, “historic”, “woefully inadequate” and a betrayal of environmental justice communities fighting against fossil fuel pollution, you would be correct on all counts.

You would be wrong, however, to dismiss the role of the Green New Deal in leading the political conversation in DC Matt Yglesias, writing for his newsletter, argues that the IRA “must [the Green New Deal] relatively few. His reasoning is simple. If the Green New Deal represents the holy trinity of climate action, which climate writer Dave Roberts describes as “investments, standards and justice”, then the IRA fails on two of the three. No argument there: the Inflation Reduction Act is not the Green New Deal.

What Yglesias underestimates is the movement’s strategy that has made massive federal investment in clean energy a top priority for the Democratic Party. That the bill emerged from the Senate without a single vote to spare, uniting a West Virginia fossil fuel millionaire with a Vermont socialist, is nothing short of miraculous. It also reveals how the climate movement, by advocating for the state to lead decarbonization, has moved lawmakers away from grassroots laissez-faire neoliberalism since the Reagan era.

Consider the death of the Senate’s latest attempt to pass federal climate legislation. The Waxman-Markey Bill of 2009 was a technocratic cap and trade program that would have created a market for pollution credits that companies could trade in order to emit greenhouse gases. Conceived by neoliberal economists and hand-picked by fossil fuel companies as their preferred climate solution, cap and trade has nonetheless been pilloried by Republicans as government self-defeat. It never reached a vote in the Senate.

Why could Democrats in the Senate pass a huge clean energy investment bill with a zero margin in 2022, but not even be able to vote on a market adjustment endorsed by a Republican economist in 2009?

You could argue, as Yglesias seems to do, that specific circumstances called for specific approaches. Perhaps the climate crisis has become so obviously severe today that it demands a more interventionist federal government, or the pandemic has made Americans more accepting of robust federal action.

This is, at best, only a partial answer. After all, Obama’s early years had their own generational crisis. Even as Americans faced the worst Depression since the Great, the White House was still hemmed in by the ideological constraints of neoliberalism — refusing to consider, say, more than $1 trillion in federal stimulus.

The tools available to a party are therefore limited not only by the number of its majorities but also by the instincts of its members. These instincts are shaped by what seems politically viable. In 2009, although Democrats controlled Washington with larger majorities than they do today, neoliberalism was the only party in town.

“There is enormous inertia—a tyranny of the status quo—in private and especially governmental arrangements,” neoliberal economist Milton Friedman wrote in 1982. The actions these institutions take “depend on the ideas lying around.” These ideas define what is politically possible at any time, setting the terms of debate in DC. The terms of this debate go by many different names. Marxists call it “ideology”; political scientists call it a “political regime”; movement strategists call it “political alignment” – but you and I can just call it common sense.

Friedman saw it as the duty of conservatives to “develop alternatives to existing policies, to keep them alive and available until the politically impossible becomes the politically inevitable”. As Naomi Klein has expertly documented, exploiting crises to advance a pro-capital agenda was a hallmark of conservatives when neoliberalism was ascendant. Now, the climate left has embraced this strategy, using societal disruptions — both the coronavirus pandemic and the extreme weather of a warming planet — to shift the terrain on which politicians operate.

If we look at the Inflation Reduction Act in this context, along with the CHIPS Act and science, last year’s infrastructure bill and the US bailout, a pattern emerges that justifies the underlying framework of the Green New Deal. By claiming the role of a tougher federal government, these bills represent a sharp break with the neoliberal dogma that has plagued climate legislation for decades.

My emphasis here is on “ragged” as much as on “break”. The Inflation Reduction Act is a compromise with reality. It is not the scientific reality, mind you, that demands a much more dramatic drop in carbon emissions than the bill alone would deliver. No, it is a compromise with political reality: the persistence of inflation fueled by the war with an imperial oil state, the iron grip that the party of denial and backwardness exerts on our democracy, the ossified dysfunction of the upper house of Congress and the power of the fossil fuel lobby.

Above all, the bill is a compromise with a coal baron. For more than a year, West Virginia Senator Joe Manchin has held federal climate action hostage, scaling back social provisions from President Joe Biden’s Build Back Better program and demanding approval for fossil fuel projects. for pets, while enriching themselves personally.

I don’t want to exaggerate my case. We have not broken the backs of neoliberalism. The string of bills directing the US government to invest half a trillion dollars in the green economy over the next 10 years pales in comparison to, say, the Pentagon’s budget, which is expected to exceed $800 billion in a single year.

But now that Biden has signed the Cut Inflation Act, Green New Dealers would do well to recognize that even if we start to win the argument, we still have to win the war. Let us redouble our efforts to thwart the fossil fuel industry, both by kicking out corrupt politicians bidding lobbyists and blocking the construction of disastrous infrastructure projects.

Just as this summer could very well be the coolest for the rest of our lives, we need to earn hundreds of billions of dollars for clean energy in the IRA the least investment the federal government is doing in the fight against climate change this decade.

Can a car dealer change the price of a car?